"Chlorine dioxide is the most effective bacteria killer known to man." (American Society for Analytical Chemistry, 1999)

MMS is a mineral substance that, in the right dosage, successfully combats harmful microorganisms and parasites in the organism or in drinking water. It is not a medicine but a mineral preparation. It has proven its power in numerous applications against malaria pathogens, against AIDS, against worms and various microorganisms such as lactic acid bacteria or streptococci.

“MMS – the breakthrough” – the book you should know

Apart from the established research of the pharmaceutical industry and conventional medicine, the former NASA engineer Jim Humble developed a substance that one must correctly call a disinfectant and which is now known under the term MMS.

From 1996 to 2006 he researched practical and safe applications of MQL. So that his research results are not buried in a foundation or made inaccessible under patent law, he decided to write and publish a book about it that gives all interested people knowledge about it, even gives precise instructions on how to make MQL yourself .

This book was published in 2007 in German-speaking countries under the title “MMS – the breakthrough”.

In view of the looming crisis, which will also lead to a crisis in established health care, it is appropriate to integrate such knowledge into individual preventive care in good time and to draw practical conclusions from it.

Order the water disinfection set based on chlorine dioxide (MMS) in our shop! 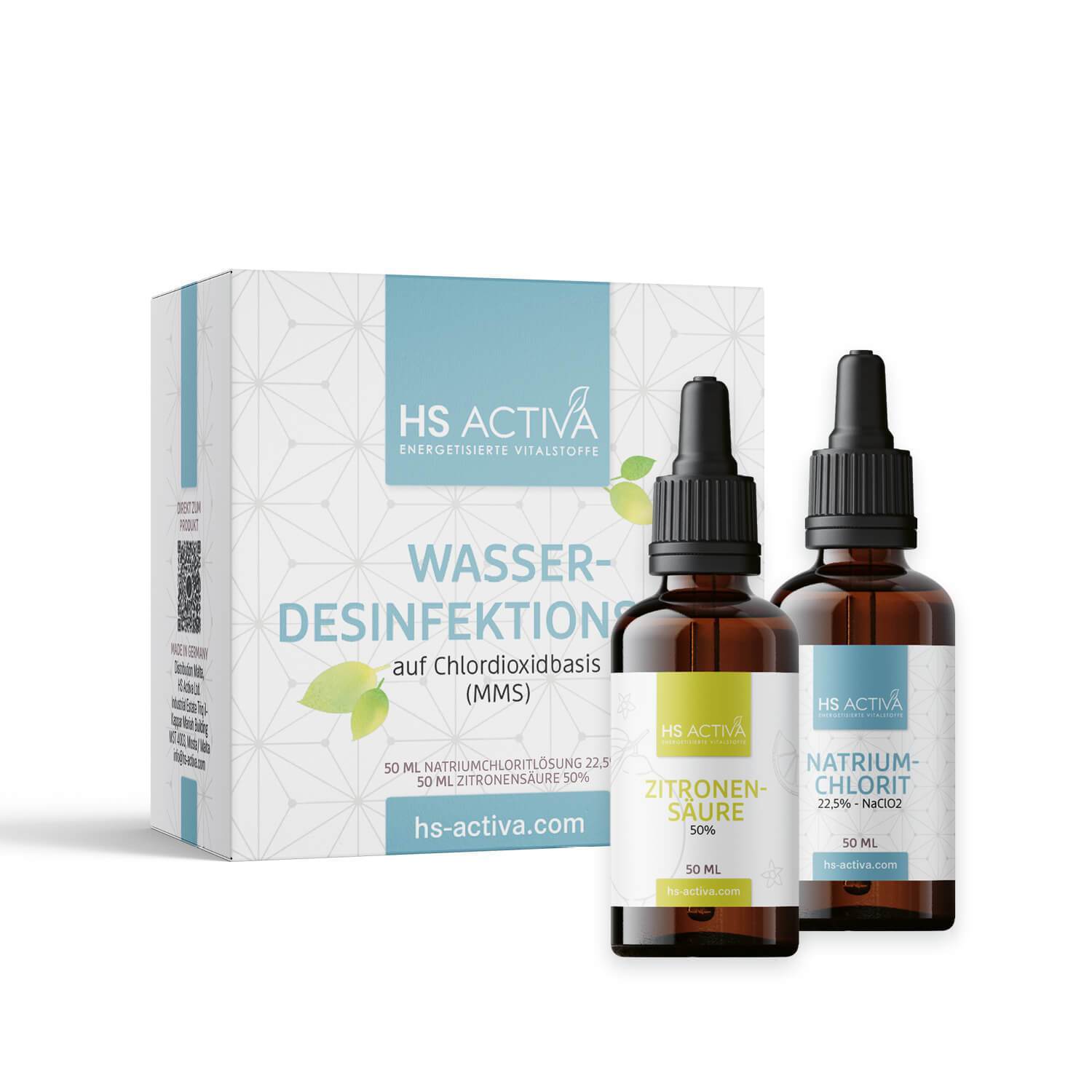 ■ For the inactivation of germs, viruses, spores, sterilization | Mineralization and structuring of drinking water

Only for a short time with a 10% discount!

Discount code (mms10) is automatically deducted from the shopping cart when you click on the green button. Only valid up to and including 01/10/2022.

How MMS was discovered

Sodium chlorite has been produced by the chemical industry for 90 years. This substance contains sodium, chlorine and oxygen. It tends to convert into sodium chloride, the common salt we know, releasing oxygen. Pure sodium chlorite therefore reacts explosively with combustible substances.

Sodium chlorite came on the market as a low-percentage solution under the name "stabilized oxygen". For example, it has been used for drinking water treatment for many years because of its germicidal effect.

Jim Humble observed how American farmers used stabilized oxygen as an admixture to feed or as a direct dose to sick animals to keep their livestock healthy. This obviously worked.

When he went prospecting for gold in Guyana in 1996, he had stabilized oxygen with him to sterilize water along the way. One member of the expedition contracted malaria in the wild.In the absence of any other means of help, Jim Humble gave him stabilized oxygen, whereupon the patient recovered within a few hours. Later, Jim Humble began researching this phenomenal healing success.

MMS is a 28% solution of sodium chlorite (NaClO2). Sodium chlorite is a salt that is formed when caustic soda reacts with chlorous acid. Since a strong base reacts with a comparatively weak acid, the salt solution is slightly basic. When sodium chlorite breaks down, table salt (NaCl) and water are produced, two substances that are completely harmless to the human body.

The disinfecting effect is caused by chlorine dioxide released by activated sodium chlorite. Chlorine dioxide is a strong oxidizing agent. Similar to oxygen, it can attach itself to hemoglobin and is transported with the blood to all parts of the body. Chlorine dioxide oxidizes by snatching electrons away from negatively charged compounds and binding them to itself.

Jim Humble found out how the chlorine dioxide can be gradually released in a delayed manner without overburdening the organism. For this purpose, an acid, for example citric acid or acetic acid, is added to the sodium chlorite for the purpose of activation/neutralization. After a reaction time of three minutes, sufficient chlorine dioxide is formed.

What does MMS do?

The released chlorine dioxide falls on oxygen-poor, anaerobic and negatively charged cells such as viruses, tumor cells, etc. and explosively oxidizes them. The cells die off. While the first chlorine dioxide consumes its reaction energy, more is released and continues the reaction process.

In this way, chlorine dioxide also accelerates the renewal process of the body's tissues by also attacking dying cells. The physical defense reaction to this leads to a strong activation of the immune system.

If there are no longer any options for reacting, the chlorine dioxide is carried with the blood to the pollutant deposits in the body. It oxidizes them and prepares them for excretion through the kidneys or liver.

The latter two aspects make MMS appear as a "fountain of youth", since typical aging processes of the body are stopped or even reversed.

Taking MMS activates the body to perform at its best, which naturally has to be followed by periods of rest. When taken regularly as a "care product", MMS should therefore only be taken three times a week with six drops each time. Dosing must be strictly adhered to.

How is MMS dosed?

Put 1 drop each of sodium chlorite and citric acid in a glass and allow the mixture to react for three minutes. Then fill it up with 200 ml of water or fruit juice for use.

Caution: Ascorbic acid (vitamin C) is not suitable for this because it interrupts the release of chlorine dioxide!

Six drops of activated MMS are enough to sterilize sixty liters of drinking water over a period of twelve hours.

For certain acute cases, there are dosages of up to 15 drops, each with five times the amount of citric acid. See Jim Humble's book for more information.

Caution: Do not take undiluted, keep away from children, wash splashes on skin or in eyes with a large amount of water. Do not bring MQL and its mixture into contact with metal! Protect from too much light and direct sunlight. MMS is not a "cure" or "medicine" and does not replace diagnosis and the necessary therapies. It is used for "disinfection". In the event of illness, competent advice and help should always be sought. All information is for informational purposes.No liability is assumed for misuse and/or damage due to the information provided and/or MMS

Order the water disinfection set based on chlorine dioxide (MMS) in our shop!

■ For the inactivation of germs, viruses, spores, sterilization | Mineralization and structuring of drinking water

Only for a short time with a 10% discount!

Discount code (mms10) is automatically deducted from the shopping cart when you click on the green button. Only valid up to and including 01/10/2022.