You will understand from the following explanations that this headline is not exaggerated! In the hope that you will research this yourself again, since we can all see at the current time (Corona) that there are always at least two interest groups!
Introduction:
Perhaps you have already seen a feature film in which a person was robbed of his vitality first by daily small doses of poison, then of his health and finally had to lose his life in agony... This can go on for years pull. Unfortunately, everyone knows examples of this...
What if, the German Society for Nutrition, for whatever reason, recommends the daily pinch of salt (table salt = sodium chloride). Negative health conditions develop as a result of the sum of the days lived (summation, depot effect). These are then treated with medication for years. And so keep us between health and death!
Who is or are the beneficiaries?
A proverb says:
What kills the doctor for his daily bread? Health and death! May he keep us in between for as long as possible! Certainly not all of them!
Did you know the following?
When a trailer truck loaded with 40 tons of table salt arrives at the bottling company from the quarrying site and every single 25kg sack is marked with a skull! When these were then filled into small shaker cans, did you ever find this skull on them?
It's interesting that from goods receipt to goods issue, such a mutation from deadly to wholesome is possible!
Only two “civilization diseases” that indicate age:
And please forget the theory that I inherited that from my...
Really? Then why didn't you already have high blood pressure at the age of 5, or the swollen legs that you can only wear sandals and your wedding ring, which sometimes gets stuck on your ring finger!
I know this upsets some! Although... Yes, your mother is to some extent to blame. For she was forgiven for being ignorant or even taught at school that you should salt all your food. Because if you sweat, you need salt!
There is more to come. In which finished product that we buy for food consumption is there a lack of table salt? Baker, butcher, pizza, pasta, rice, meat, fish, poultry, vegetables, salad etc.? Notice anything?

Example how deadly table salt can be! It takes less than you think!

Death after chocolate pudding. https://rb.gy/8z3s1g
Frankental: A girl (4) accidentally puts salt in the chocolate pudding instead of sugar. The stepmother discovers the salt scattered on the kitchen floor - and forces her daughter to eat the pudding. The child dies from it!
I can already hear what some of you are thinking, but I don't use refined salt, I treat myself to
I'm sorry to disappoint you.
Table salt obtained from rock salt has the following typical composition:
Chloride 59.90%, Sodium 38.85%, Cadmium 0.25%, Phosphorus 0.15%, Magnesium 0.12%, Sulfur 0.02%, Potassium <0.01%.
Sea salt, like other unrefined rock salts, consists of 97 to 98% sodium chloride. Like all table salt, Himalayan salt contains only small traces of other minerals apart from chlorine and sodium. (Source: Wikipedia)
The last thing to mention is the Dead Sea, why can only tiny creatures exist in it?
To give the salts more names so that we can understand it better and not make different assumptions:
Salts are minerals or also called electrolytes, from the latter one could deduce that they are electrically conductive! That's right, nerve stimulus conduction = electrical impulse transmission! How else should it be possible to breathe life back into us with a defibrillator (electric shock)!
Would you like a little comparison?
Children are highly electrical beings, energetic and agile. Same as electricity (grandmas and grandpas know what I'm talking about). With aging, the electrolytes (conditions - in us out of balance) are missing and shift. So we are getting slower and stiffer! Like a battery that keeps getting drained! Until the light goes out forever!
Although this electrification of the minerals in us does not apply to everyone!
But now to the two "civilization diseases" listed at the beginning!
What leads to high blood pressure in relation to table salt, since doctors already give the good old advice to consume less table salt.
IMPORTANT: It is known that sodium chloride binds water and draws it into the tissue and holds it there!
If water is drawn from our blood into the tissue, then the viscosity of our blood will change negatively. That inevitably leads to higher blood pressure in order to transport the thickened blood through the smaller vessels!
In addition, our beloved table salt pulls water out of our cells and into the intercellular tissue. Our cells dry up, which in turn leads to less elasticity in our vascular cells (our vessels are circular muscles) and this is another cause of higher blood pressure!
It is easy to deduce that without exception all of our glands (thyroid, pancreas, etc.), organs and muscles under this negative influence of common salt lose a massive amount of energy! This also indicates that our organs are underperforming!
If some people feel a high craving for something salty, then it would probably be wrong to use common salt, or which electrolyte is missing?
Unfortunately, the body only signals the desire for salty and not which salt! From the explanation of the high blood pressure caused by the consumption of table salt, one or the other has certainly noticed the second disease mentioned at the beginning, water retention / edema and its relationship.
In addition to the previous representation, that sodium chloride (sodium chloride) draws water out of the cells into the interstitial tissue and holds it / binds it. The only question that remains is why in the legs and fingers, or why?hands!
This is simply due to gravity! Needless to say, of course, all human tissue serves as a water reservoir and it is quite common for people to lose up to 20kg and more in weight as a result of the conversion from sodium to potassium be able!
It's just incriminating water!
By the way, I would like you to imagine sticking your head in a bucket filled with water and taking a deep breath. You will probably say, "You're suffocating!"
Right, that's exactly what happens to your cells on the outskirts where they're overwatered! This is a life-threatening condition that is getting progressively worse. Tissue is dying! Regeneration is only possible to a limited extent!
I have to briefly point out that water tablets (diuretics) are the wrong approach here, nor do they help with high blood pressure, beta-blockers, ASA, etc. CAUSED! Never medicines are missing in our body.
Medications can indeed save lives. But please act CAUSE afterwards! Otherwise additional new clinical pictures!
arise
Other signs of the shift from potassium to sodium are:
Dry today, bags under the eyes, restlessness, trembling muscles, profuse sweating!

The salt we have been missing for years is: potassium!

This potassium, like all other electrolytes, exists in nature in various compounds! The question arises, which connections have which advantages?
Here is our solution:

Order premium potassium in our shop! 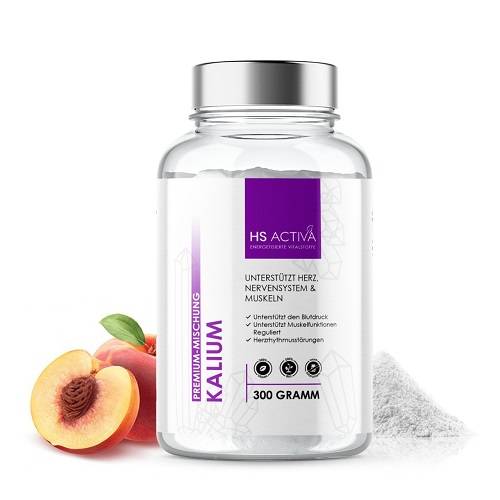 ✅ The potassium premium blend was put together based on the research results of Dr. Max Gerson

✅ The potassium premium mixture has a cell building and cell regenerating effect due to its large spectrum of activity.

View product >>
The Potassium Premium Blend was created based on research by Dr. Max Gerson. He had recognized that table salt added to food (opponent of potassium) prevents the healing processes of diseases! Since the average population uses a lot of table salt, it is easy to imagine the health risks that result from this.
Potassium should be 10 times higher in food than table salt
Salt has a cell-inhibiting effect outside the cell and potassium has a cell-building inside the cell. Cell edema is the result of too much salt and according to Dr. Find Max Gerson in all diseases.
In order to be able to intervene benevolently here, we have the potassium premium mixture with four types of potassium according to Dr. Max Gerson compiled.
In this way, a potassium balance can be established at all levels in the body.
The potassium premium mixture has a cell building and cell regenerating effect due to its large spectrum of activity.
Application: Stir 1 heaped teaspoon in 1 liter of water and drink in sips throughout the day! If necessary, add juice!
I hope this document has given you a little more understanding of your body!

Order premium potassium in our shop!

✅ The potassium premium blend was put together based on the research results of Dr. Max Gerson

✅ The potassium premium mixture has a cell building and cell regenerating effect due to its large spectrum of activity.